School is too easy, students report

As I dressed for work this morning, I heard of this Federal survey regarding how are children are being challenged in schools today. I was not surprised about the survey results because even I as a parent have noticed how different schools teach different things to the same grade levels of students. I have noticed how some schools focus more on scoring well on the state wide testing, some on getting into college and some on just getting the students out of high school. It is sad how much energy and focus is put toward many things in our country and not much of it is put toward educating today’s youth.

I read this article on USA Today website and found it to be good and worth sharing…. ~ Read it, Share it & Enjoy it & Discuss it ~ Shawna K Clark

Millions of kids simply don’t find school very challenging, a new analysis of federal survey data suggests. The report could spark a debate about whether new academic standards being piloted nationwide might make a difference. 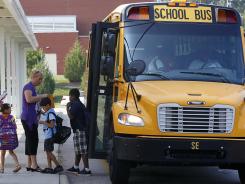 The findings, out today from the Center for American Progress, a Washington think tank that champions “progressive ideas,” analyze three years of questionnaires from the Department of Education’s National Assessment of Educational Progress, a national test given each year.

•37% of fourth-graders say their math work is “often” or “always” too easy;

•57% of eighth-graders say their history work is “often” or “always” too easy;

•39% of 12th-graders say they rarely write about what they read in class.

Ulrich Boser, a senior fellow at the center who co-wrote the report, said the data challenge the “school-as-pressure-cooker” image found in recent movies such as Race to Nowhere. Although those kids certainly exist at one end of the academic spectrum, Boser said, “the broad swath of American students are not as engaged as much in their schoolwork.”

Robert Pondiscio of the Core Knowledge Foundation, a Virginia non-profit that pushes for more rigorous academics, says the pressure-cooker environment applies only to a “small, rarefied set” of high school students. The notion that “every American kid is going home with a backpack loaded with 70 pounds of books — that’s not happening.”

The data suggest that many kids simply aren’t pushed academically: Only one in five eighth-graders read more than 20 pages a day, either in school or for homework. Most report that they read far less.

“It’s fairly safe to say that potentially high-achieving kids are probably not as challenged as they could be or ought to be,” Boser said.

The center supports new Common Core standards that are to be implemented nationwide in the 2014-15 school year. The standards, adopted by 45 states, are meant to be “robust and relevant to the real world,” giving schools “a consistent, clear understanding of what students are expected to learn,” according to the initiative.

Gladis Kersaint, a math education professor at the University of South Florida and a board member of the National Council of Teachers of Mathematics, said she’s not surprised by the findings. “I think we underestimate students,” she said.

The push for higher standards — and students’ willingness to meet those standards — “suggests that they’re ready to be more challenged in math classes,” she said. “Hopefully this can be a motivator for teachers to say, ‘Yes, we’re moving in the right direction.’ ”

Witte, who trains teachers, said both their conception and their students’ conception of school have been heavily influenced by testing. “That’s what they think school is, and that’s really a shame,” she said.